Skip to content
Some years ago, while watching Javier Bardem in Vicky Christina Barcelona, I fell in love with the city and its vibes. When the trip was being planned with a very close, special and dear buddy, it was the easiest to zero down on a country. Spain it is!! So, we landed in Barcelona.
Barcelona the city is historically futuristic. The spread of buildings in this city looked so modern in the 1900s and they still do. The linear balconettes steal the show. Come spring, Spaniards hang their bohemian flower pots on the railings. Peonies and all the other colour spurt out of each house as if they have always been there. These linear architecture concept sometimes curve and wave into the other streets. Just like these. 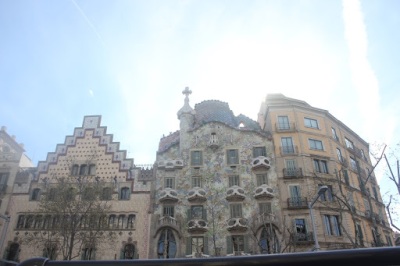 End of March was indeed a pleasant time to visit Espana. Start of the spring, with spring in their feet. The roads were no less than a big party scene. Meet the eyes and Hola! happened. Barcelona showered us with love in the form of food, experiences, weather and some amazing views in 2 days. I could have easily spent a month there. Like my cousin, who I met in Spain said, “why don’t you come here and do some course” 😉 Nice thought, but ah!
So if one has less time, my suggestion is to hop on to the Hop-on-off bus and tune into the English audio tour mode. To watch the city go by from the top of the bus is something else. And you also get to capture some great images. Another best thing about these tours is, that you can chose where you want to get down to explore further. Opt for the top floor of the bus and make the most of the breeze, the sky and feel.
2 hours in our day 1, realization set in that Barcelona is all about Gaudi, Messi and Tapas. In all honesty, I couldn’t have much of Gaudi but the other two. Hmm, etched on my mind.
Things that we did right:
Bulls Eye: Booked ourselves a hotel at the city center: Walked around the hotel and found the most happening clubs & cafes to chill out at. This was the evening that we landed after a whole long day of flight. We were too tired to check the internet and hunt for the right place to go out to dine at.
Btw, La Rambala is the place you must chose to stay in. We found a quaint boutique hotel with the cutest room. www.hotelpraktikrambla.com
Strolled: Did not rush. Choosing the pace of the trip somewhere adds to the soaking in / getting tired of an individual. I need to stroll when travelling. I need to be outdoors. I need to have the local wine/beer and food and relish it. May be even talk to the chefs. That’s my pace!
So, when the afternoon set it (slightly late for lunch) and we walked in to this seafood specialty restaurant. It was definitely worth the wait.
One dedicated morning at Camp Nou: Woah! One needs to be there to feel the energy. The Barcelona Futball club wear their pride. It’s an historic branding case study that needs inclusion in B-schools. The Brand FCB and the Brand Messi! Its cult. I wish I could catch the El Classico in the stadium, but we were flying out that day.
My dad is a football fan. He watches local country matches too which are aired on television. He was the most excited when I spoke about CampNou and how everyone was wearing Messi and not Neymar Jr. He paused for a second and here is what he said, exact verbatim. “May be one day, people will want to be Neymar Jr”. You get the drift? 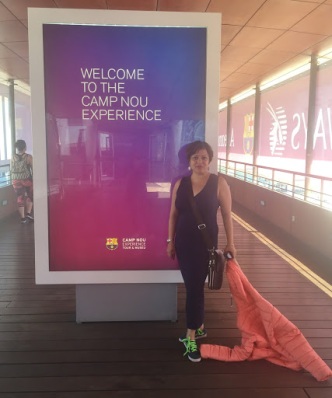 Stepped down: To check what is taking La Sagrada Famíliaso long to complete. It seems anonymous donations is keeping work going. Brain child of Gaudi is an architectural marvel. It seemed like any other under-construction basilica from behind. That’s where we were dropped and we picked our tickets from. (This church has my contribution too now :D). On time, we were guided towards the entrance and once infront of this gigantic towering towers, We knew why it was the talk of the world. Detailing, Intricacy and nature inspired. Gaudi was ahead of his time. He worked on this project for 43 years and the tour scripts say that he was so fanatically deep in his thoughts while walking the streets that a tram hit killed him. This man was called mad and you will see the madness in this Church. There is much to it that meet the eyes. Outside the church has no freaking idea on how the inside of the church looks. It’s the most stunning space I have visited in recent times. My jaws open wider with every place I set my eyes on. Gaudi was mad but I loved his work.
Here is the website for a quick info. http://www.sagradafamilia.cat/sf-eng/

Let go: In Gothic Quarters, a neighborhood with windy cobbled lanes and houses full of Catalan flags. With less time in hand and already tired body, I am sure we didn’t do justice to the place. But I must tell you, I have had the best ever meal in a typical Catalan restaurant. The taste of tuna mixed with that base(I forgot what it was) still lingers on. People call it a labyrinth. It is fun to just let go and immerse in the glorious roman past. You never know what surprise awaits you. Look at what we saw;) 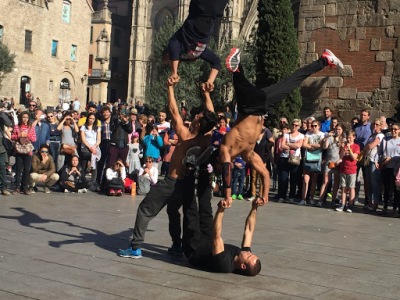 Started with Tapas and Paella immediately: Don’t waste time. Start talking the Tapas language, I say! Small portions served in a platter. Some say, that few restaurant get it along with your drinks. But, we had to order. Delicious and the right bold portions.
After getting back to India, I have been craving for Paella. Colorful, casually tossed in a pan. I think the Spaniards know how to party and make the apt party food. The size and portion is so convenient to pass around amongst friends. 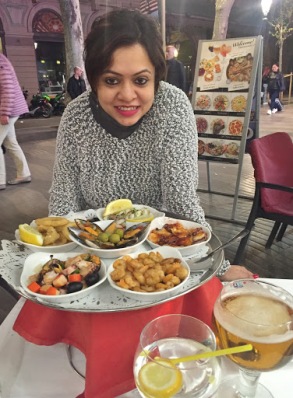 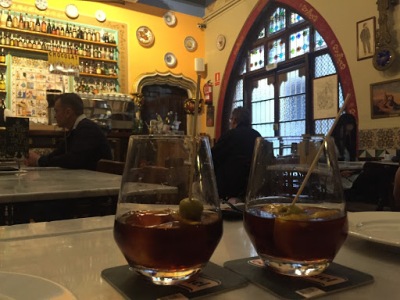 A tip: When travelling from India to Spain, Land in Madrid and fly out of Barcelona. It is convenient!

Do you dream of places that you would want to be in? Is it always like you had imagined to be or you get surprised? Like, There is more to it than meet the eyes!!
Put no boundaries to your thoughts and there shall be no boundaries in reality. Worth it, really!
Love!!